● Supporting and empowering families and individuals victimized by domestic violence ●

● Preventing terminal illness from causing a family to succumb to poverty ●

● Providing rescue and counselling to victims ●

● Supporting families and individuals in standing against infanticide ●

In response to the flood that affected Chennai in December 2015, J&H has adopted one community which had been severely affected and has been helping in the restorative process.

The people of this community are the urban homeless and live in tents which were completely washed away during the floods. Each family in the community was given a bag with basic necessities like toothbrushes, toothpaste, soap, towel, bedsheet, mat, water bottle, biscuits, noodles, Odomos, Savlon, and ORS.

After the initial relief intervention, JnH team gathered the community together and documented each family. Gathering their stories, what their legal status is, current needs of families and the community as a whole.

The community declared with one voice that even though they had lived there for 35 – 40 years, they were being shifted without an order from the government. This would affect their jobs and also the schooling of their children. They were unaware of their rights to the provision of alternate housing facilities and proper formal notice of eviction.

The staff of Justice and Hope visited the responsible government offices and other departments. The officials were cooperative and thus the eviction is postponed to a later period of time during which we will work on getting the people alternate housing facilities.

Our friends at Solai Street were greatly affected by the cyclone Vardah, which tore through the city of Chennai in December 2016, destroying their tents in the process. The staff of JnH visited the community, spoke to the people, and conducted damage assessment of the place to find out how many new tents were required and how many could be mended. The staff then bought new tarpaulin sheets and distributed it to those whose tents were completely destroyed so that they could find shelter. 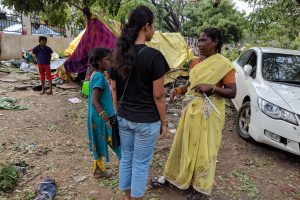 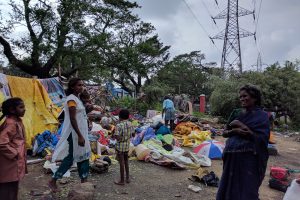 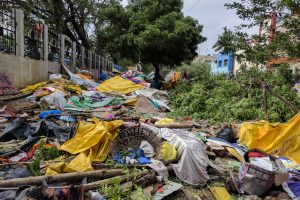 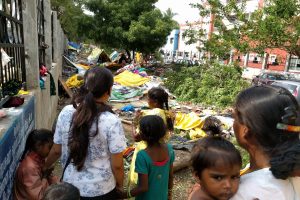 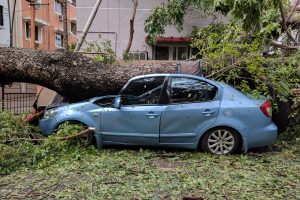 Incessant rains on December 1, 2 & 3 of 2015 recorded unprecedented rainfall in a century and the city was submerged. Scores of families were desperate to receive anything they could after losing all of their life’s savings.

Justice and Hope being a small Trust collaborated with other organizations and volunteers. We responded to the news and reached out to the pockets where people were stranded and waiting for help. The team provided medical care, mats, bedsheets, blankets, food packets, drinking water, biscuits and milk powder, plastic sheets for covering their homes, cleaning kits, mosquito repellents and nets etc.

J&H put out an open invitation on Social Media – Facebook for families who were unable to contact their loved ones and volunteers went to provide for them, check on them and rescue them to safer areas.

J&H found people who took shelters in halls and under structures that could house them during the night. Volunteers provided food, milk, mats and medicines. After the rains stopped, the teams went and provided mats, blankets, bedsheets, mosquito nets, mosquito repellents, vessels for cooking, clothes etc.

The staff of JnH met with the Tamil Nadu Slum Clearance Board (TNSCB) and the officials from the Chennai Metro Water Supply and Sewage Board (CMWSSB) to discuss the status of the eviction and the process of enumeration by the TNSCB.

The staff assisted the officials of TNSCB as they conducted an official enumeration of each family at Solai Street. The officials collected each family’s details and their photos were taken in front of their respective tents.

The staff visited two possible resettlement sites to which the urban homeless community may be shifted and rehabilitated, once eviction takes place. The staff scouted the housing facilities and also livelihood opportunities for the community.

They tracked the modes of transportation and measured the distance from the resettlement sites to the nearest schools, hospitals, market place, police station, fire station, etc.